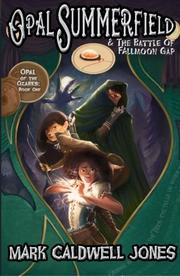 OPAL SUMMERFIELD AND THE BATTLE OF FALLMOON GAP

The first installment in the Opal Summerfield series has her discovering her magical origins and a parallel world.

Opal Summerfield, the heroine of Jones’ debut fantasy series, lives an ordinary life in the Ozarks with her adoptive parents. But on her 16th birthday, she receives a mysterious gift from the pet hawk of a mystic—a beautiful opal necklace. What she doesn’t know is that the opal necklace, which belonged to her dead mother, has great magic and will lead her to discover whom she really is. It is also coveted by, among others, the wicked Big Maggie, a disguise of Amina the Conjurer, who will stop at nothing to possess it. When hooded men kill Opal’s family, she flees deep into the wilderness, crossing a threshold into another world. An undercurrent of racial tension is at work in Jones’ novel: Opal is a blue-eyed African-American girl, “a spectacle among both the white folks and the black folks of the town.” With great attention to worldbuilding, Jones creates two very different realms, making for the interesting contrast between Grigg’s Landing in the Ozarks, where there’s a distinction between the white and black sides of town, and the magical land called the Veil. The Veil is a place full of magical creatures and places, such as flaming horses and Fallmoon Gap, a beautiful city hidden in the mountains. In the wilderness, Opal is helped by a boy named Luka, a member of the Wardens, who protect the mountains and Fallmoon Gap. There’s also the mysterious Ranger, who’s tasked with saving her. Yet Opal is no girly girl or damsel in distress. When she’s attacked by wereboars, she fights them off with the help of her magical necklace. She’s tough, brave and smart—an appealing heroine for young readers, especially girls. The narrative slows down in the dull middle sections, but it finds its stride when Opal makes it to Fallmoon Gap, where she learns how to control the magic of her opal necklace. Taking classes such as Forensic Magic & Engineering Enchantments and Magical Armaments, Opal trains to be a Warden. In the climactic, action-packed final act, Opal learns terrible truths about Amina, the Ranger and herself as she battles to protect the Helixflow, the source of all magic.

A dazzling debut with magical places, creatures and gemstones, plus a compelling heroine young readers will love.