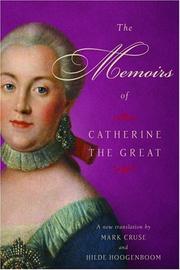 THE MEMOIRS OF CATHERINE THE GREAT

Long misjudged by history, Empress Catherine (1762–96) gets a word in for herself.

This new translation of Catherine’s memoirs does much to make her seem a contemporary, or at least not quite so removed from our time. A product of the Enlightenment, Catherine fended off her adolescent loneliness by reading: the classics in their original languages, works in the modern European languages, complex books thought to be above the heads of women. The reason for the 15-year-old’s loneliness? Her husband, scarcely older, who was a bit of a dimwit and more than a bit of a child; when she first meets Peter III of Russia, to whom the young German princess was married off in 1744, he is busily playing soldier with his household staff. Later he graduates to racing dogs in his rooms and beating the losers. “These were truly the games of a child and of perpetual childishness,” Catherine laments, scarcely becoming the future tsar. For her part, the young woman born Sophia Augusta Frederika of Anhalt-Zerbst had early on learned more regal ways: “I saw with pleasure,” she writes, “that from day to day I gained the affections of the public, who regarded me as an interesting child who was not without intelligence.” Certainly the Empress Elizabeth came to regard the young Grand Duchess this way, lamenting, by Catherine’s account, the fact that her protégée should be reading the works of Plato in Greek and brushing up on the masterpieces of Russian literature while her idiot husband was concocting schemes to build a palace in which everyone, the royals included, would dress up like Capuchin monks. No political memoir—and Catherine is a shrewdly political creature through and through—would be complete without its intrigue, and, as Peter discovers, that is surely the case here. As we leave off, Catherine is preparing to deliver a mighty comeuppance, but that’s the stuff of the history books.

A lively rendering of a work long out of print in English. Just the thing for anyone who has to survive in a political world.