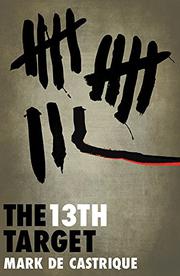 A bodyguard turns shamus when his charge is the victim of a suspicious shooting.

An oblique prologue involving an anonymous superrich cabal hints at a grand plot involving the Federal Reserve and the upcoming national election. Cut to Russell Mullins, working as a bodyguard for besieged Reserve executive Paul Luguire after many years protecting presidents as a member of the Secret Service. Mullins feels a strong affinity for the slightly older Luguire, who is clearly showing the stress of his position. When Mullins gets a late-night call that Luguire has been shot and killed, the news hits him hard. He's loath to cooperate with Arlington Police Detective Robert Sullivan, especially when the investigator won't tell him any details about the shooting. Meanwhile, the enigmatic Fares Khoury decides to "wait for the man named Russell Mullins to come to him." Mullins vents to his boss, Ted Lewison, then consults his colleague Amanda Church, also ex-Secret Service, and finally decides to investigate with her assistance. Already on this course is dogged investigative reporter Sidney Levine of The Washington Times, who smells a huge story. A key piece in the complex puzzle is banker Craig Archer, who has noticed irregularities in recent transactions and becomes very stressed indeed when an anonymous caller begins making demands. As he twists in the wind, Levine and Mullins begin to share some of the discoveries that will lead to the truth.

Though its prose is merely serviceable and its characters stereotypical, this intricate thriller from de Castrique (The Sandburg Connection, 2011, etc.) offers a good deal of interesting and timely information on the Federal Reserve.