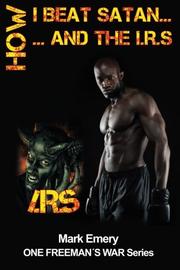 From the One Freeman's War series

In this brief book, Emery’s subject is a perennially contentious one: taxes—specifically, how to avoid paying them. Emery wastes no time in his brief book blaming the IRS for about as much “chaos, pain, destruction, suffering and even death” as any other institution in the world. He even likens it to Satan; indeed, he says they’re inextricably linked. As such, Emery applies a veneer of religiosity, including Scripture, to his tips and tricks about dodging and countering the IRS. But what he’s mainly concerned with is teaching his readers to use the government’s own intricate rules and procedures against it. He advises sending a “filing statement” in lieu of a 1040 tax form, for instance, or establishing a paper trail of your “good faith” intention to obey the law, thereby depriving the government of the ability to prove your bad faith: “I exempted myself from being drawn into court and because I have never received any information to the contrary from the IRS about my averments…they stand as fact and I am free! What’s for lunch?” In quick, engaging chapters, he briefly sketches arcana such as the Code of Federal Regulations— “a virtual playground for truth seekers and trouble makers like me”—and the “acceptance of value” loopholes in connection with the Uniform Commercial Code. Throughout his book, he stresses the “fun” of the subject, but he also stresses that he himself is not an attorney and that nothing in his book should be construed as legal advice. Wise advice, because he’s absolutely correct about the IRS’ ability to ruin lives and its short temper when provoked. As he points out, jails are full of people who’ve advocated schemes like the ones he’s describing. As a hypothetical, though, his argument makes lively speculative reading.

A short series of daredevil tricks and stunts to fight the IRS; use at your own risk.