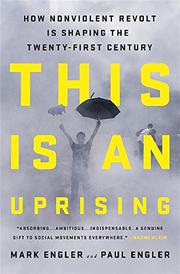 THIS IS AN UPRISING

How Nonviolent Revolt Is Shaping the Twenty-First Century

Co-authors Mark Engler (How to Rule the World: The Coming Battle Over the Global Economy, 2008) and Paul Engler, founding director of the Center for the Working Poor, collaborate on a cleareyed, enthusiastic treatise, seeing evidence in diverse historical and recent events that collective civil actions are supplanting violent rebellions in creating social change. At the outset, they wonder, “what if periods of mass, spontaneous uprising are neither as spontaneous nor as unbridled as they might at first appear?” They build their response around a number of longitudinal real-world examples, ranging from Martin Luther King’s 1963 campaign in Birmingham to Gandhi’s 1930 “salt march,” which discredited the British Raj, to the recent Occupy protests. They synthesize these narratives with an overview of effective strategies, based on theorists Saul Alinsky, Frances Fox Piven, and Gene Sharp (an obscure academic considered a perennial favorite for the Nobel Peace Prize), producing a clearly organized mix of history and handbook. Although King was an early proponent of “momentum-driven mass mobilization,” the Englers note that his approach was more improvisational and high-risk than is historically remembered. They hold up the surprisingly quick mainstream acceptance of gay marriage as an example of successful legislation and networking; in contrast, the divisive tactics of ACT UP in response to the 1980s AIDS crisis produced both backlash and effective change. In a chapter on organizational discipline, the authors examine how the Weather Underground’s destructive approach essentially crippled the New Left. Although the authors write with clear passion regarding these examples of dramatic social change, they acknowledge that the Arab Spring has provided a counternarrative: “the revolution in Egypt presents a troubling case….Not all efforts to create change prevail over the long term.”

A usefully organized, concise history of social movements that will appeal to newer generations of activists.