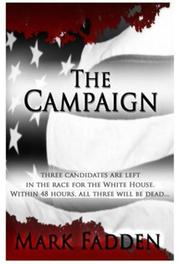 Dallas Police chief Scott Turner investigates the murders of presidential candidates while caring for his dying mother in this taut political thriller.

Dallas, Texas. Dealey Plaza. A promising presidential candidate and an assassin. No, it’s not 1963, but present-day Dallas, the candidate is an Independent, the murder weapon is a bomb, and investigating the whole mess is Scott Turner, the youngest police chief in Dallas history. Is it terrorism? A murder disguised as assassination? Or—after two more candidates are killed—some kind of conspiracy? As Dallas’ mayor, the FBI and Homeland Security get involved, Turner must navigate a complex landscape of competing interests and rich men’s secrets. Already stressed by caring for his beloved mother, who is dying of cancer, the police chief must decide whom to trust among figures close to the investigation: longtime mentor Mo, ex-fiancée and now DHS agent Jessica, his old friend Mayor Tommy Archer. Finding the truth will test all of Turner’s boldness and ingenuity. Fadden (The Brink, 2010, etc.) has created an appealing narrator in Turner. Far from being a macho Texas-sized boaster, he realizes he might be in over his head: “Military devices. Black markets. This had international incident written all over it. And here I was just shy of five years of experience as a police chief, three of which were in a town of 700 millionaires where my biggest investigation was a stolen Rolls Royce replica golf cart.” Turner’s sense of humor, his friendships and his integrity are, refreshingly, more important to his crime-solving than guns and ammo. The scenes with his mother are genuinely moving. That said, there’s plenty of action and plenty of scope for Turner to come down hard on the bad guys. The dialogue is lively and natural, minor characters are well-drawn and interesting, and a well-structured plot unfolds the truth in just the right doses at the right times.

Exciting and fast-paced, this is a satisfying political thriller with heart.