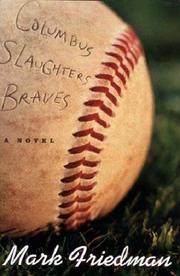 Echoes of Bang the Drum Slowly, The Natural, and Brian’s Song are heard throughout this literate weeper about an athlete dying young: an intermittently incisive though ultimately flat first novel.

The story’s narrated—in a pleasingly lucid, confident voice—by Joe Columbus, the older brother who watches with mingled amazement, subdued pride, and rancorous envy as his sibling CJ becomes a baseball phenom and a beloved public figure. Joe drifts into marriage with his college girlfriend Beth, then settles into a career as a high-school science teacher as she moves into a high-pressure law firm. Meanwhile, golden boy CJ—as intelligent, friendly, and generous as he is athletically gifted—rises from sandlot prominence in their southern California neighborhood to dazzling success as the Chicago Cubs’ All Star third baseman, even challenging Joe DiMaggio’s consecutive game-hitting streak. Friedman forcefully communicates the jealousy even Joe knows is irrational and unfair (“What I really wanted was that some thing, the smallest thing, would be denied him”). But there isn’t really a whole lot of novel here. Subplots involving Joe’s dealings with a problem student, Beth’s relationship with a colleague who uses her as model for a character in his fiction, and the couple’s incompatibility, seemingly cured by her surprise pregnancy, bear a token relation to the main plot here, but really only manage to distract our attention from it. Even potentially strong scenes, like Joe’s nighttime visit with his father to “Nikeland” while CJ lies gravely ill in a hospital, are inexplicably truncated, as if Friedman saw no need to develop them. Still, there’s no doubt that the Cain-and-Abel tension between the brothers engages our attention, or that the emotional closing pages do not have genuine impact.