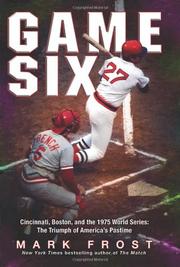 Cincinnati, Boston, and the 1975 World Series: The Triumph of America's Pastime

A pitch-by-pitch account of the game best known for the image of the hopping, waving, ecstatic catcher Carlton Fisk, whose 12th-inning home run won the game for the Boston Red Sox.

Sports nonfiction vet Frost (The Match: The Day the Game of Golf Changed Forever, 2007, etc.) is a bit too fond of superlatives. Sox outfielder Dwight Evans made the “greatest catch in the history of the World Series”; at game’s end Boston Globe sportswriter Peter Gammons wrote “one of the most lyrical, inspired and impressionistic columns ever written about a baseball game.” And so on. All the players were larger-than-life. Carl Yastrzemski had the greatest work ethic since John Henry; Sox pitcher Luis Tiant loved his father more than anyone since the baby Jesus; Reds’ third baseman Pete Rose had a “gap-toothed Huck Finn enthusiasm for the game.” Sprinkled throughout the breathless game narration are allusions to historical events from the mid-1970s: the presidency of Gerald Ford, the imminent American Bicentennial celebration, the advent of Saturday Night Live. Between pitches, Frost delivers the back stories of just about everyone involved: the sportscasters and -writers, the players, the owners, the managers—even the Fenway Park organist. The diction is often of the aw-shucks variety. Reds manager Sparky Anderson once ripped a couple of guys a new one; writer Maureen Dowd was “a sharp young cookie.” Fisk finally comes to bat in the 12th nearly 300 pages in. After a page-long description of the flight of the struck baseball, Frost devotes nearly 100 more pages to the aftermath of the game. He tells us what happened to everyone and claims that this particular game rescued baseball from a serious drought.

Fans won’t argue the game’s significance to the sport, but Frost’s narrative is over-the-top and gushing, making it strictly for baseball die-hards.