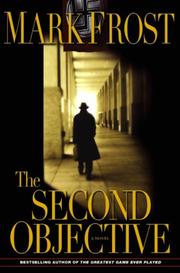 Germany makes a last-gasp attempt to defeat the Allies and change the course of history, in the latest from Frost (The Six Messiahs, 1995, etc.).

In the winter of 1944, when most Nazi military leaders believe defeat is near, Hitler has Lieutenant Colonel Otto Skorzeny launch a brazen plan. He recruits a secret brigade of 2,000 men, all of whom speak English and are conversant in American culture, to penetrate the enemy’s defenses and lay the groundwork for a final attack. The next step involves an elite corps of 20 soldiers within that brigade, those most capable of passing as American soldiers and striking at the heart of the Allied braintrust. Only their leader, the ruthless SS officer Erich Von Leinsdorf, knows (along with the reader) who their assassination target is and how they will proceed. Von Leinsdorf’s chief aide in this secret mission is Private Bernard Oster, raised in Brooklyn before returning to his homeland with his German parents, and a soldier well versed in the American vernacular Von Leinsdorf will need for the scheme to succeed. Yet from the start, Oster displays divided loyalties, leaving the reader to wonder where his allegiance will ultimately lie as the mission turns increasingly deadly. Though much of the dialogue sounds recycled from black-and-white war movies, Frost opts for moral ambiguity over the standard heroes-and-villains clichés. As the narrative humanizes some of the German soldiers, it details the corruption of black-market American profiteers, resulting in alliances that further complicate fidelities. Ultimately, the plot turns into a game of two-on-two, as Earl Grannit, a New York police investigator before enlisting, and his more innocent sidekick, Ole Carlson, discover the Nazi plan and do their best to thwart it.

It doesn’t spoil the suspense of this historical fiction to know which side wins.