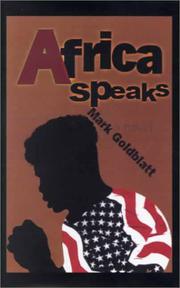 An oddity, this story of New York street-smart black life by columnist and Bible studies instructor Goldblatt (Fashion Institute of Technology, SUNY) is actually both hip and moving.

Africa Ali, known to his high-school teacher dad as Kevin, is a bright guy and small-time dealer, 23, full of himself, black pride, and the “dawgs” in the 149th Street Crew he calls his family. He’s got no fear about being interviewed by some whitey who wants to “keep it real,” so into the tape recorder Africa talks, nonstop, about his main man Herc, who keeps his attitude alive and enhances his police record, about his dad, whom he doesn’t talk to anymore, about Tanya, the mother of his child, who kicked him out of her life in the birthing room when he couldn’t say he loved her, about Keisha, who loves him enough to fight for him but from whom he keeps distant, lest she engage his feelings. Africa talks about black superiority, about his own racist and sexist views, about his time in court, about his time in bed with Keisha. He raps, rants, struts, falters—and steadfastly refuses to discuss his older brother Dexter. As the series of interviews proceeds, Africa occasionally delegates others from his crew to speak for him: Keisha tells about how Africa saved her from having zero self-esteem after she tried to help a girlfriend whose child was murdered by its father; intellectual Jerome delivers the Black Power message but also spills the beans about what happened to Dexter; Fast Eddy reports on Africa’s recovery from a self-inflicted gunshot wound. And Africa himself struggles to describe his relationship with a Chinese girl. For all his protests, it might just be love.

It takes chutzpah for a nonblack to write something like this, but some risks are worth the effort for what they reveal of essential humanity. This is one.