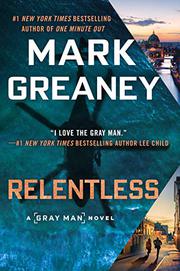 The 10th installment in the Gray Man series begins with a dent in the hero’s armor and revs up with nonstop action.

Court Gentry, aka the Gray Man, is recovering from a stab wound, and he really needs to get some rest. He’s tired and badly weakened, not yet fit for operational duty, but the CIA’s off-the-books contract killer is “wholly unaccustomed to free time.” Soon he’s in Caracas, trying to spring his comrade in arms Zack Hightower from a Venezuelan prison. Then he’s off to Germany to deal with a possible coordinated attack on Americans in Berlin. Gentry, whose CIA code name is Violator, is that rare killer with a heart, so he takes only “righteous and worthy” assignments and does them right. His CIA boss congratulates him on one assassination, saying “You put a warhead on his forehead.” Gentry’s in love with Zoya Zakharova, a field operative also working for the CIA, but gunning down bad guys keeps both too busy for a meaningful relationship. Meanwhile, a sultan in the United Arab Emirates can hardly wait for his father to die of cancer, and an Iranian Quds sleeper agent plots mayhem in Berlin. Evildoers abound in this bloody thriller, including Americans. But the star of the scum is Maksim Akulov, who works for the Russian Mafia and whose target is Zakharova. Think of Akulov as the Gray Man without the moral compass. The title aptly fits the plot, as the hero scarcely takes a breather. There’s enough bloodshed to pour into two thrillers, and author Greaney doesn’t spare the good guys. Gentry’s body is “racked with pain and exhaustion” much of the time, but he is relentless. And Zack gets more than scratched while he thinks that “fighting a robot attack would be one badass way to go.”

Not for the squeamish but a jolt for thriller junkies.