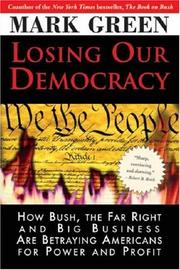 How Big Business and the Radical Right Are Destroying Our Freedom

If you’ve been reading the headlines, have been keeping up with the work of Kevin Phillips, and are already disposed to think that the nation is a mess politically, then most of what Green has to say won’t come as news. Still, this is a handy one-volume summary to keep near the dining-room table for arguments with your neocon neighbor, the one who thinks the Bush administration really cares for the average American. Not so, says Green, adding, “George W. Bush has embraced democracy more as a prop than a policy.” His catalogue of Bush and company’s misdeeds adds up to an impressive indictment, but it is his diagnosis of the underlying causes for them that resonates. For one thing, he argues, Republican rightists have been more successful at “marketing their brand” than has the opposition, in some measure because of the illegal and/or unethical machinations of bigwigs like the now-deposed Tom DeLay; for another, you’ve got to be rich or a superb fundraiser to enter politics these days—he notes that it cost Ken Livingstone 80 cents per vote in the London mayoral race of 2001, whereas it cost Michael Bloomberg $100 for the same thing in New York that same year—which gives well-to-do corporations even more access and power in the political process. Add fundamentalist Christianity, laissez-faire policies, the administration’s fondness for outright lying and deception, a misguided war on terror and chaotic worldview, the Patriot Act, and the like, and even though the president “does not wake up daily and figure out how to sabotage democracy,” his actions trump whatever good intentions he might have, with the loss of democracy the result.

A compendium of talking points for the midterm, tetchy without being shrill.