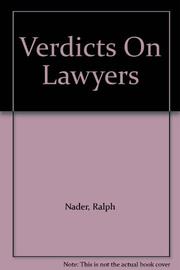 The Nader imprimatur is a sure sign of a necessary muckrake, with the accent on public responsibility, and in the aftermath of Watergate, disillusionment with these knaves who have a license to steal—the members of the legal profession—is at an all time high. As co-editor Mark Green, who blew the whistle on The Unseen Power of the Washington Lawyers recently, points out in one of the pieces collected here, the last decade has seen an explosion in the earnings of lawyers, pricing them out of the reach of middle-class as well as poor litigants and reinforcing their venal corporate ties. Only lawyers could document the tales of self-dealing, collusion and misplaced loyalties compiled here—yet apparently few of them have any regard for their Canon of Ethics or a sense of themselves as anything more than guns-for-hire, client instruments. Green et al. attack the ABA in several essays, citing chapter and verse of their shady judgments. There are several strong pieces on access to power through poverty lawyers, the public interest bar and class action suits, a scrutiny of the accountability of both corporate and government attorneys and some finger-pointing at judges of varying degrees of competence and honesty. Reform is the keynote, of course, with a little rhetoric and much solid research. Contributors include Martin Garbus, Rep. John Conyers, Beverly Moore, Fred Harris, Joseph Califano, Ramsey Clark, Victor Rabinowitz, Jack Newfield and John Tunney. A book to make you angry and also reassure you with its advocacy.