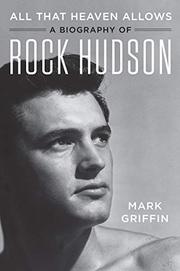 ALL THAT HEAVEN ALLOWS

A Biography of Rock Hudson

A thoughtful exploration of the career and elusive private life of Rock Hudson (1925-1985).

It’s surprising that in the three decades since Hudson’s death, there has been little written about him that could be considered comprehensive. Previous biographies came from past lovers and friends, and each seemed to have an agenda, often salacious. Griffin (A Hundred or More Hidden Things: The Life and Films of Vincente Minnelli, 2010) goes a long way toward rectifying this issue, casting a respectful light on some fresh as well as familiar details. The author begins with Hudson’s difficult childhood: Born Roy Scherer, he and his mother were abandoned by his father when he was just 5, and his mother would eventually remarry an abusive alcoholic. Griffin then moves on to his various jobs and his brief stint in the Navy before he arrived in Hollywood. Like Hudson’s friend Marilyn Monroe, his early recognition in Hollywood was largely attributed to his exceptional good looks, and he also experienced sexual exploitation on his path to stardom. He was taken under the wing of the powerful yet notoriously lecherous agent Henry Willson. After appearing in several largely forgettable films and signing a long-term contract with Universal Studios, Hudson established his mark as an accomplished actor and romantic lead under the guidance of talented directors such as Douglas Sirk and George Stevens. Yet it wasn’t until Pillow Talk (1959) that Hudson found his sweet spot as a versatile comedic actor. In the 1970s, he found renewed fame on TV as the star of the hit series McMillan & Wife. Griffin pays equal attention to Hudson’s private life as a sexually active yet closeted gay man, and he explores his complex relationships with both sexes. Throughout, he provides a balanced, multifaceted view of his subject. By the end of his life, having disclosed his exposure to HIV, his professional and private lives were forced to merge. Yet his death would bring much-needed recognition and funding to the AIDS epidemic.

An engrossing and carefully documented account of a beloved film icon’s life.