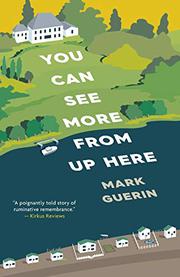 YOU CAN SEE MORE FROM UP HERE

In this debut novel, a writer reflects back on his tortured relationship with his father.

Walker Maguire’s dad, Michael, was an impressive man—an Air Force surgeon who rose to the rank of colonel and hospital commander. But then he was unceremoniously forced out of the military in 1969, 10 years before his retirement, and found work as a company doctor at an automotive plant. Embittered, he turned to alcohol and violently took his resentment out on Walker. As a grown man in 2005, Walker must deal with the fact that his father, now in his 90s, is in a coma due to a terrible car accident and likely to die soon. Walker flies out to Belford, the unspectacular factory town in northern Illinois that served as the stage of his father’s banishment from professional success. Walker is inspired to pen his reflections on his volatile connection with his father and begins to write a private memoir that draws him back to the fateful summer of 1974, when he held a job at the factory where his dad worked. There, Walker witnessed a confrontation between workers Norm Ditweiler and Manny Camarasa—the former the father of his ex-girlfriend and the latter a Latino laborer, resented by bigoted white co-workers. Walker was reluctant to share what he saw with anyone; he only had a privileged vantage point because he was goofing off in an unauthorized area. But when Manny’s livelihood was threatened, Walker was obliged to intervene, which pitted him against his father. In this novel, author Guerin beautifully captures the powerful contradictions of the relationship between father and son, which combines elements of friendship and antagonism. The author only gradually discloses Walker’s epiphanies about his dad, which not only transform the protagonist’s personal opinion of him, but also the future arc of his own life. The prose is confident and confessional throughout, and Guerin draws the reader into the compelling story by having Walker unflinchingly reveal his sense of disappointment in himself. Like the journalist he is, Walker clamors for the truth, whether it’s consoling or not.