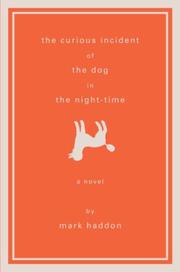 THE CURIOUS INCIDENT OF THE DOG IN THE NIGHT-TIME

Britisher Haddon debuts in the adult novel with the bittersweet tale of a 15-year-old autistic who’s also a math genius.

Christopher Boone has had some bad knocks: his mother has died (well, she went to the hospital and never came back), and soon after he found a neighbor’s dog on the front lawn, slain by a garden fork stuck through it. A teacher said that he should write something that he “would like to read himself”—and so he embarks on this book, a murder mystery that will reveal who killed Mrs. Shears’s dog. First off, though, is a night in jail for hitting the policeman who questions him about the dog (the cop made the mistake of grabbing the boy by the arm when he can’t stand to be touched—any more than he can stand the colors yellow or brown, or not knowing what’s going to happen next). Christopher’s father bails him out but forbids his doing any more “detecting” about the dog-murder. When Christopher disobeys (and writes about it in his book), a fight ensues and his father confiscates the book. In time, detective-Christopher finds it, along with certain other clues that reveal a very great deal indeed about his mother’s “death,” his father’s own part in it—and the murder of the dog. Calming himself by doing roots, cubes, prime numbers, and math problems in his head, Christopher runs away, braves a train-ride to London, and finds—his mother. How can this be? Read and see. Neither parent, if truth be told, is the least bit prepossessing or more than a cutout. Christopher, though, with pet rat Toby in his pocket and advanced “maths” in his head, is another matter indeed, and readers will cheer when, way precociously, he takes his A-level maths and does brilliantly.

A kind of Holden Caulfield who speaks bravely and winningly from inside the sorrows of autism: wonderful, simple, easy, moving, and likely to be a smash.