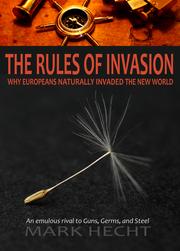 The Rules of Invasion

A sweeping debut book attempts to explain the politics of invasion in terms of ecological factors.

The possibility that external factors—rather than philosophical or cultural principles—are the primary determinants in societal success was famously explored by Jared Diamond in Guns, Germs, and Steel (1997). Hecht explicitly fashions his book to be both a follow-up and rival to Diamond’s groundbreaking effort. For Hecht, however, the central causal factor is ecological, and he explores the imaginative and counterintuitive thesis that the nature of the landscape itself decisively shapes the ability of nations to become prolific invaders of other countries, extending their reach and power. The author considers the relationships between biodiversity, cultural diversity, and human behavior, concluding that the three are entwined in a complex causal nexus. There is also a multitude of factors that contributes to biogeographic diversity: altitude; heterogeneity of flora and fauna; the practice of agriculture, which tends to diminish biodiversity; the scale of the land available; and many others. An eclectic work, Hecht’s study is strikingly multidisciplinary, drawing from esoteric fields of study like invasion ecology. Some of his ultimate conclusions offer concise explanations that almost court skepticism: the Chinese turn out to be unspectacular invaders because of their dependence upon rice, which weds them to a specific, geographically bound climate. (Grain farming is less labor-intensive and less committal, unleashing the nomadic impulse behind the invasion of foreign territory.) Europeans, on the other hand, are overachieving invaders, given the consideration of 16 different factors. Hecht’s examination certainly doesn’t lack diligence, and he’s scoured an extraordinary pile of disparate secondary literature. He’s impressively keen to withhold the drawing of confident conclusions when the evidence doesn’t warrant it—at one point, he casts doubts on an entire chapter of his own. The writing can be uneven—he vacillates between haltingly dense academic jargon and an overly familiar breeziness. In addition, he has no choice but to acknowledge that however edifying his choice of causal determinants is, it is necessarily limited and reductive: “By circumstance, topography, intellectual thought, means and abilities, and perhaps some luck and quirks of history, nations of Europe became great invaders.” Still, this is a fun and enthralling exploration, and no less so because it inadvertently advertises its own philosophical failings.

A creative and scientifically wide-ranging account of Europe’s success as a conqueror.