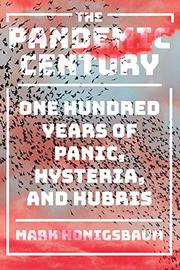 One Hundred Years of Panic, Hysteria, and Hubris

Powerful accounts of a dozen epidemics from the last 100 years.

Journalist and medical historian Honigsbaum (Arts and Sciences/City Univ., London; A History of the Great Influenza Pandemics: Death, Panic and Hysteria, 1830-1920, 2013, etc.) begins this lively, gruesome, and masterful book with the 1918 Spanish flu, which infected 500 million people and may have killed more than 100 million. Many that followed, including AIDS, Ebola, Legionnaires’ disease, SARS, and Zika, are familiar to most readers. Lost to history—but no less terrifying—were the Los Angeles plague epidemic of 1924 and the wave of parrot fever that swept the nation after 1929. All mobilized the best scientific resources of the time, with results ranging from dramatic to ineffectual. Fortunately, all eventually died out, but more are inevitable as humans crowd into cities as well as into the wilderness and jungle, where new organisms await; douse our bodies’ bacteria with antibiotics; and exchange viruses with pets and domestic animals. “Time and again,” writes the author, “we assist microbes to occupy new ecological niches and spread to new places in ways that usually become apparent after the event. And to judge by the recent run of pandemics and epidemics, the process seems to be speeding up. If HIV and SARS were wake-up calls, then Ebola and Zika confirmed it.” Most pandemics arrived without warning. Physicians and epidemiologists quickly described what was happening, often wrongly at first but eventually getting it right after massive research, brilliant insights, and no lack of courage. As Honigsbaum amply shows, politicians and journalists often ignored bad news until they couldn’t and then opposed measures that might harm the local economy. Since even medical experts tended to overreact at first, the media can be excused for proclaiming the apocalypse, but they showed no lack of enthusiasm.

Avoiding the hyperbole that contemporary media relished, Honigsbaum mixes superb medical history with vivid portraits of the worldwide reactions to each event.