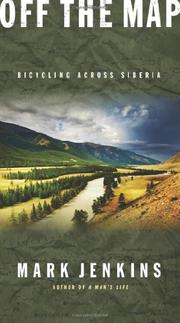 OFF THE MAP: Bicycling Across Siberia

Feisty, sometimes brilliant first book about a journey across Siberia by bicycle. Jenkins, an editor for Backpacker and Summit, writes a leaping, impulsive prose that, for all its originality, should be whipped for its barbarisms: ""He lived with his faraway eyes crumpled in a stickwood wheelchair holding him and his medals very still in his backyard with his rosebushes growing tall as trees."" In 1989, he tells us, he was invited to join three Americans (one a woman) and four Russians (two women) on ""the last great ride"" (Africa, South America, China, Europe, India, and Australia had already been done), 7,500 miles from Vladivostok to Leningrad--a journey to be filmed by Carl Jones, an American documentary filmmaker. Most of the team members were like Jenkins, born bikers obsessed with biking, often knocking off 90 miles a day through heavy weather. After the Americans met their Russian counterparts in Moscow, the team flew to Nekhoda, from where they would cross land twice the breadth of the US and go through seven time zones. At first the team was accompanied by a police car that tried to keep the Americans from observing the deprived lives of nearby Soviet citizens, but the bicyclists soon found themselves feted time and again by villagers following their progress on state-run TV. That Soviets live a hard life, with memories of Stalin hanging heavy, became clear to Jenkins; in fact, the Americans met Russians who had been jailed for five years for ""capitalism"" or for going into business on their own. Three of the fellow Russian bikers were not friendly and, tensions mounting, the team finally broke up on the last leg of its big ride. Mud, cabbages, sub-zero frigidity--altogether a super adventure that landed the team in the Guinness Book of World Records.