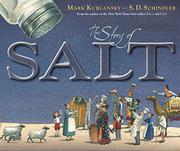 THE STORY OF SALT

The author of Cod’s Tale (2001) again demonstrates a dab hand at recasting his adult work for a younger audience. Here the topic is salt, “the only rock eaten by human beings,” and, as he engrossingly demonstrates, “the object of wars and revolutions” throughout recorded history and before. Between his opening disquisition on its chemical composition and a closing timeline, he explores salt’s sources and methods of extraction, its worldwide economic influences from prehistoric domestication of animals to Gandhi’s Salt March, its many uses as a preservative and industrial product, its culinary and even, as the source for words like “salary” and “salad,” its linguistic history. Along with lucid maps and diagrams, Schindler supplies detailed, sometimes fanciful scenes to go along, finishing with a view of young folk chowing down on orders of French fries as ghostly figures from history look on. Some of Kurlansky’s claims are exaggerated (the Erie and other canals were built to transport more than just salt, for instance), and there are no leads to further resources, but this salutary (in more ways than one) micro-history will have young readers lifting their shakers in tribute. (Picture book/nonfiction. 8-10)