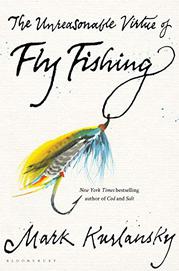 THE UNREASONABLE VIRTUE OF FLY FISHING

The prolific author returns to an old love: angling for trout.

“Any day fishing on a wintry river is a great day,” writes Kurlansky, refuting Tolstoy’s grumpy assertion that angling is “a stupid occupation.” His river of choice is the appropriately named Salmon, in central Idaho, where the water flows so swiftly that Lewis and Clark named it the “River of No Return.” It’s not open in winter, notes the author, but there are other wintry rivers where one can test “the only two rules of fly fishing that cannot be broken: you cannot fall in and you must keep your fly in the water as much as possible. Everything else depends on circumstance.” This being a book by Kurlansky, who never met a fact he didn’t like, the narrative turns from his experiences as a fisherman to a more universal history. First come the fish themselves, the salmonids, which people have been harvesting for millennia. Only one of those species is a true trout, namely Salmo trutta, the brown trout, with every other kind of trout so called only because they resemble it. The author then moves on to the “acclimatization” projects of the French and the British, “an imperialist concept in an age of Empire,” whereby British anglers felt it was only proper that the brown trout follow the course of conquest, which explains why it can now be found in places such as New Zealand, Chile, and South Africa, “to assure that anywhere a British colonist went, there would be good game for a fly rod.” As for rods and flies, Kurlansky geeks out, reciting names that are known to this day: Charles Orvis, for one, whose contributions to the tackle box are legion; and Clarence Birdseye, the frozen-food magnate whose automatically retracting reel when a fish struck was a dismal failure since “hauling out the fish is part of fishing.”

Stuffed full of trivia, data, lore, and anecdote—a pleasure for any fan of trout fishing.