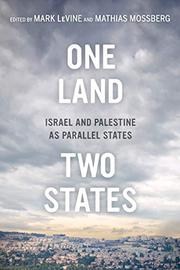 Israel and Palestine as Parallel States

The free movement of people and goods over one shared area, while governed by one Israeli state structure and one Palestinian, offering common economic and security policy, and equal (if separate or harmonized) political, legal and civil benefits for all? Proponents of the Parallel States Project, organized by the Center for Middle Eastern Studies at Sweden’s Lund University, reached out to Israeli, American and Palestinian academics for some thoughtful ways of breaking out of the countless failed models for Israeli-Palestinian coexistence. A two-state solution is considered dead in the water, according to Alvaro de Soto (former UN special envoy), while the apartheid structure of Israeli occupation is not feasible. Neither side is willing to give up its territory or sovereignty—but what is “sovereignty,” Jens Bartelson (Lund Univ.) asks in an excellent historical overview, but an outmoded notion of the modern nation-state that has eroded since the pressures of globalization? Indeed, many of the contributors look to the once-utopian structure of the European Union as an effective new way of “dovetailing the sovereignty claims of individual states within an institutional framework.” What would this parallel sovereignty with integrated resources look like? Peter Wallensteen (Uppsala Univ.) lays out a graduated concrete plan starting in 2017, delineating everything from the safeguarding of human rights to taxation and property rights. Crucial concerns of security are hashed out in two separate essays, one from the Israeli side (Nimrod Hurvitz and Dror Zeevi) and one from the Palestinian (Hussein Agha and Ahmad Samih Khalidi), though the general consensus seems to be that by mixing the populations, hostility and terrorism are eliminated, encouraging other Arab countries to ease their animus of Israel. Also important: empowering the Palestinian economy and allowing refugees right of return.

A visionary approach so daring that it could actually work.