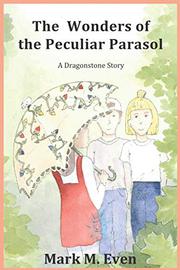 THE WONDERS OF THE PECULIAR PARASOL

In this debut children’s book, three cousins use a magical parasol to visit Storyworld, where they encounter an evil witch who must be stopped.

Cousins Amanda Jane “Mandy” Mandez, Mickey Veen, and Gina Sitzma, all 10 years old, are celebrating Mickey’s birthday at their great-grandmother Gigi’s house. During a game of hide-and-seek, Mandy discovers a parasol in the attic with a wooden handle carved in the shape of a dragon and a dull white knob on top. When Gina rests the parasol on her shoulder and twirls it, she’s put into a short trance that sends her to Storyworld, where she’s greeted by J.T. (short for “Just The Valet”). He explains some conditions for using the parasol (for example, it only works on sunny days) and tells Gina about her ancestor Mathias Phef Venscen. He was a powerful wizard and J.T. was his squire; Phef lives on after his body’s death in the enchanted realm. Now J.T. guides and protects Storyworld visitors, who live “in the story as if it was real.” The cousins all have exciting adventures via parasol. For example, Gina goes to a royal birthday party in a fairy-talelike land; Mickey travels to Mars on a spaceship and helps rescue scientists; and Mandy visits Talon, “the center and the core of Storyworld,” where real dragons live. The secret is revealed to others, who join in. At Gigi’s house in the summer, the whole family gathers to hear the latest escapades. But all is not well in the mystical realm: Mandy’s mother is turned to stone by Loganna, the “Lizard Witch,” who’s amassing an army to invade Storyworld. The group executes a perilous plan to mount a rescue mission and fight Loganna, requiring Mandy to dig deep for her magical powers.

In his novel, Even uses some popular fantasy themes, such as an enchanted portal, dragons, wizards, charmed objects, and rescue quests. Also pleasing are scenarios such as discovering a special heritage and acquiring occult abilities. Mandy, for example, gets the delightful news that as Phef’s descendant, she is “of magic—and thus a witch.” The adventures are nicely varied to suit different tastes for types of stories and settings, from outer space to undersea. The escapades themselves are mostly described after the fact, when a more direct account might be more enjoyable. That’s especially true given that the tale can drag a bit during exposition about the rules, exceptions, history, and characteristics of Storyworld and its magical items or creatures. Many of the realm’s rules seem made to be broken, making it hard to justify long explanations of lore. But the author does describe an appealingly affectionate extended family, lifted from the ordinary by their wizardly backstory. The chapter heading images by debut illustrator Canfield are naive but charming. The book ends on a dramatic and promising note of magical exploits to come, presumably less burdened by the need for lore.

A pleasing fantasy that occasionally bogs down but usually entertains.