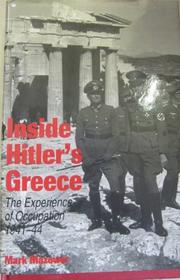 Up-close, anecdotal look at the Nazi occupation in Greece, by Mazower (Modern History and International Relations/University of Essex). What with ideology, global strategies, and battle tales, it's easy to overlook what daily life was like for a non-Aryan nation under the Third Reich. From the German anti-aircraft gun in front of the Temple of Olympus and children playing a few yards from resistance fighters left hanging dead by their necks, to the utter disruption of family life and complete economic collapse, Mazower elucidates the particulars of Hitler's fate for non-Aryans. The author's tone is almost detached, but his documentation is overwhelming: Rich and poor Greeks have their say, as do Germans and American observers, and it's clear that even at the peak of its success, Nazi rule—nearly unchallenged and seemingly invincible- -included ``sadistic overtones.'' Hitler wanted to plunder Greece, and, according to Goering's orders, the German leaders ``could not care less...that people...are dying of hunger. Let them perish so long as no German starves.'' Mazower examines how this brutal policy clashed with Greek culture, inspiring local brigands to resistance. Anecdotal evidence abounds here, including stories of priests, whores, politicians, defeated soldiers, black marketeers, and men shipped to work in Germany. Meanwhile, Mazower explores the German experience as well: the satisfaction of controlling what was respected in the West as the birthplace of culture; the profound relief of serving in Greece, away from the Russian front; and, ultimately, the SS terror system as it bore down on the resistance. A grinding, horrific experience, intimately explored. (Seventy illustrations)