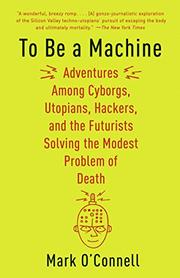 TO BE A MACHINE

Adventures Among Cyborgs, Utopians, Hackers, and the Futurists Solving the Modest Problem of Death

An enlightening tour of transhumanism, the movement dedicated to radically prolonging human life.

In his first book, Slate book columnist and Millions staff writer O’Connell chronicles his travels around the world meeting and discussing transhumanism with the movement’s aficionados. The narrative is packed with eccentric characters, but none subscribe to the far more popular commercial life-extension industry that promises immediate results. On the contrary, transhumanists aim to achieve their goals through genuine technical advances, including implants, genetic modification, prostheses, mind-uploading, and biohacking. Those who feel they’ve been born too soon will perk up at O’Connell’s early chapter on Alcor, a cryopreservation facility where technicians will, for $200,000, carefully freeze your body upon death (just your head runs $80,000) and keep it until thawing, revival, and reconditioning become feasible options. Most governments and universities refuse to finance research aimed at immortality, but Silicon Valley billionaires, among others, are less inhibited. As such, O’Connell turns up plenty of freelancers with legitimate scientific backgrounds working on the problem as well as websites (Maxlife.org), organizations (Humanity Plus, described on its website as advocating “the ethical use of emerging technologies to enhance human capacities”), and even venture capital firms (Longevity Fund). Elderly readers may gnash their teeth, but others will have hope since many experts predict breakthroughs within decades. O’Connell does not claim to be impartial. He lets spokesmen have their say, explains their science for a lay audience, and does not conceal his amusement at wacky enthusiasts or his dismay at gruesome self-experiments. He also detours into robotics and artificial intelligence, which, once computers become smarter than humans, may render our perishable bodies irrelevant. Skeptics deliver thoughtful warnings, and O’Connell himself waxes hot and cold.

An unsettling but informative and sometimes-optimistic view of mostly legitimate efforts at life extension.