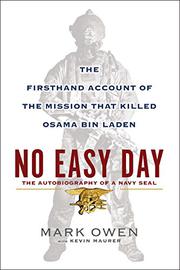 The Firsthand Account of the Mission that Killed Osama Bin Laden

by Mark Owen with Kevin Maurer

Books on Navy SEALs have poured off the presses for years, but this one has generated national interest and controversy for a reason the title makes clear.

Sensibly, the author (a pseudonym of ex-SEAL Matt Bissonnette) works with military journalist Maurer (Gentlemen Bastards: On the Ground in Afghanistan with America's Elite Special Forces, 2012, etc.), and the result is a fast-paced, professional narrative that will appeal to military buffs as well as general readers. Raised in rural Alaska, Owen yearned to be a SEAL from childhood. He succeeded in 1998, passing the brutal screening and training. After several deployments, he passed another screening to join the SEAL’s specialized anti-terrorism unit in 2004. This is a mostly traditional SEAL memoir filled with nuts-and-bolts descriptions of weapons, gear, training, tactics and short, nasty battles in which (unlike the movies) plenty goes wrong, but (like the movies) many bad guys pay the price. The book’s second half delivers a precisely detailed, vivid account of the Osama bin Laden mission. Luck, good and bad, plays an essential role in any raid. One attacking helicopter crashed, but the veteran team worked around the mishap. On the bright side, the Pakistani hideout was feebly defended. The author does not deny that the SEALs shot every male on sight, bin Laden included.

Since bin Laden was a significant figure, historians will consult this book as a primary source; they, as well as most general readers, will not regret it.