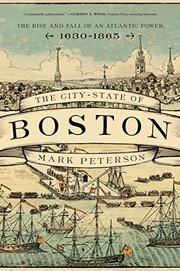 THE CITY-STATE OF BOSTON

A historian thoroughly scours the record to resurrect the history of a well-intentioned ideal society that was ultimately “undermined by fatal flaws.”

Unlike many of the doomed early American experiments at colonization, such as Walter Raleigh’s “lost” Roanoke Colony and other failures in Newfoundland, Boston—created to escape “the imperial decay and religious persecution that threatened England’s government and church”—succeeded, both as a center of Atlantic Puritanism as well as a trading hub. Created by a charter issued by King Charles I in 1629, the “city-state” of Boston, writes Peterson (History/Yale Univ.; The Price of Redemption: The Spiritual Economy of Puritan New England, 1997), was founded as a “self-conscious attempt to build an autonomous self-governing republic modeled on biblical and classical republican ideals in a New World environment.” Though silver and gold were not discovered nearby, furs and codfish took their place and were entirely exploited due to a judicious bartering with the Native inhabitants, who, unlike the early settlers, were hunters and fishers. When these commodities became scarce and the economy in relation to English trade tanked, the enterprising Bostonians looked to the Caribbean colonies, where sugar production was booming. They began building their own ships, and slaves were imported by the mid-17th century. Sustaining Indian wars and Atlantic trade competition, Boston emerged from being a “backwater, a bystander in the puritan crusade against the Spanish foe, into a new transatlantic center of colonization to which other plantations looked for assistance.” From there, Boston exerted its unique position by issuing its own coins, extending its territorial reach, and “fending off the crown’s agents.” Through specific historical personages such as John Adams and African-American poet Phillis Wheatley and chapters framed on biblical allusions (“The Selling of Joseph”), Peterson leads us through the city’s Enlightenment ideals and how they clashed with the city’s links to the American South’s slave-driven economy.

A meaty, methodical exploration of a crucial American founding stronghold.