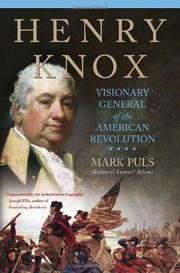 Visionary General of the American Revolution

Competent biography of Washington’s talented young protégé, who commanded the artillery throughout the American Revolution and served as the nation’s first Secretary of War.

When hostilities broke out, Knox (1750–1806) was a Boston bookseller and enthusiastic member of the local militia, reports Puls (Samuel Adams: Father of the American Revolution, 2006). Most of his knowledge about artillery came from the books in his shop, but that didn’t stop him from offering his services to Washington, who arrived after the Battle of Bunker Hill to take charge of the siege of Boston. Knox entered the war during the winter of 1775-76, when he directed the transport of several dozen immensely heavy cannons from Fort Ticonderoga across 200 miles of frozen wilderness to Boston. Their punishing firepower persuaded the British to evacuate. Directing artillery and engineering forces throughout the war, Knox served as Washington’s essential can-do man. The general ordered a three-pronged attack across the Delaware on Christmas Day, 1776, but only Knox’s prong successfully ferried 2,400 men and 18 field guns across the ice-clogged river to the Jersey shore. In the interim between independence and the first presidential election, he served the Continental Congress as Secretary of War. His proposal for a national military academy was greeted with admiration but did not bear fruit as West Point until 1802. As Washington’s Secretary of War, he worked hard to professionalize the nation’s minuscule Army. When Congress finally agreed to build warships in 1794, Knox educated himself on the subject and then made brilliant technical decisions that created a small but technically advanced U.S. Navy. Readers will encounter few surprises in this portrait of an uncontroversial figure, and some may be annoyed by the author’s attempts to enliven matters with fictionalized dialogue and confident pronouncements on his subject’s inner thoughts.

Despite the pop-history trimmings, a solid résumé of everything anyone would want to know about this undeservedly neglected not-quite founding father.