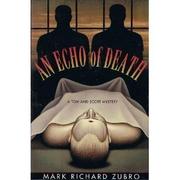 AN ECHO OF DEATH

Returning from a fund-raiser already spoiled by a spat they've been having over their new guest Glen Proctor, high-priced baseball pitcher Scott Carpenter, Glen's old teammate, and his schoolteacher lover, Tom Mason, find that although matters are about to get much worse, they don't have to go on squabbling about Glen. He's been shot to death, and the killers, or at least some guys with a lot of firepower, are waiting just outside their door. So Tom and Scott (The Principal Cause of Death, 1992, etc.) hightail it out of there, deep into the bowels of the Chicago tunnel system. When they finally emerge to cry on police shoulders, Glen's body has vanished, and nobody believes them—not even Glen's estranged parents, Jason and Felicia Proctor, brutal rivals for business, money, and filial affection. And that's not the only rivalry Tom and Scott are caught in, either, because Glen, up to his cute little butt in Mexican malfeasance (drugs, antiquities smuggling, masquerading as Scott to cover himself), ran into the cross fire between drug lord brothers Frederico and Pedro Torres, who are only too happy to turn their attention to the real Scott Carpenter. Tom and Scott's constant run-ins with small-time hit men and big-time crooks takes Zubro wildly out of his modest depth. Long before the ending, you'll have stopped caring which of the interchangeable villains actually pulled which trigger.