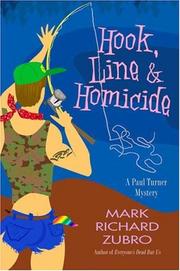 In addition to all its natural dangers, the Canadian northwest turns out to be homophobic.

Chicago cops Paul Turner and Buck Fenwick (Everybody’s Dead but Us, 2006, etc.) have packed up their families and headed for their yearly vacation at a Canadian fishing camp in Cathura. They’ve hardly settled in before they spot Scarth Krohn, the local bully, and his cronies hassling some First Nations kids. When Paul’s son Jeff fishes up Scarth’s dead body from the pier the next day, Billy Morningsky becomes the prime suspect. The good-old-boy sheriff refuses to listen to Paul, his lover Ben or even the straight Buck and his wife, labeling them big-city nancy boys. Determined to discover who really killed Scarth, Paul finds that half the locals think the former football star was a hero whose peccadilloes were covered up by his rich daddy. Then Scarth’s lady friend Evon Gasple is found dead, and everywhere Paul turns, he hears anti-gay slurs and sees a gay-bashing fist ready to land. Through it all, he tries to keep his kids Brian and Jeff safe and his reporter pal Ian from openly cruising the menfolk—while still putting a fish or two on the table for supper.