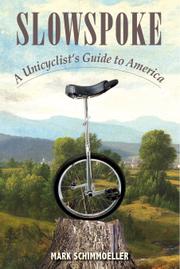 A Unicyclist's Guide to America
by Mark Schimmoeller
GET WEEKLY BOOK RECOMMENDATIONS:

Schimmoeller’s thought-provoking memoir, his debut, cuts between his 1992 unicycle trip from North Carolina to Arizona and his current life as a homesteader in Kentucky.

These rather unorthodox parallel tracks—unicycling thousands of miles and living off the grid with his wife, Jennifer, growing their own food without city services—are set forth in the book’s first pages, with a series of flashbacks and reminiscences that outlines just how those circumstances came to be. There’s no simple answer for why the author decided to embark upon his unicycle trip; maybe it related to him being a slow, quiet person in a loud, fast world. He left a prestigious but stifling magazine internship in New York, knowing he didn’t belong there but not having any sense of what he was meant to do. His skills consisted mostly of knowing how to ride a unicycle, build a solar cooker and write. Perhaps, he thought, he could pedal across the country and author a guidebook, A Unicyclist’s Guide to America. Though the guidebook as conceptualized never came to be, the trip happened. With a gentle, meandering style that evokes the twists, turns and backtracking of unicycling, the memoir captures Schimmoeller’s perceptive observations of a largely unseen, back-roads America. He also lovingly writes of his home in Kentucky, his otherwise spare prose blossoming into lavish descriptions of the local fauna, which changes with the seasons. To the degree that there’s a central conflict in the memoir, it relates to the couple’s efforts to protect their acreage—which includes rare, reverently described old-growth forests—from development and thus preserve a corner of the world in which slow-paced, soft-spoken people can thrive. The book will remind readers of other homesteading narratives, such as Barbara Kingsolver’s Animal, Vegetable, Miracle (2007). In some ways, it also transcends personal history, like a modern-day Pilgrim’s Progress: one man, alone on a road, seeking redemption and ultimately finding it.

Not just for unicyclists, Schimmoeller’s memoir is beautifully written and often funny; a real find.

MADE FOR YOU AND ME
by Caitlin Shetterly
Nonfiction