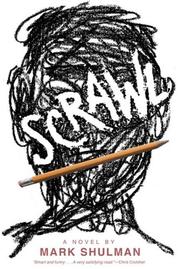 Tod Munn is in trouble for breaking into school and vandalizing school property. Previously, he’s taken kids’ lunch money, broken eyeglasses, intimidated weaker kids. He’s the stereotypical school bully. Or is he? His friends have been sentenced by the disciplinary committee to endless hours of cleanup duty, but Tod, for some reason, is sent to daily detention with Mrs. Woodrow, the guidance counselor and former English teacher, where his punishment is to write several pages per day in a composition notebook. And despite his handwriting, his scrawl, his prose is quite good, raising the question, early on, of how a thug like Tod could be such a literate writer, let alone have read Moby-Dick, Oliver Twist and A Clockwork Orange. But this novel-as-journal isn’t just the author’s conceit; Tod’s writing skill, his clear prose and natural voice, makes sense as readers get to know him through his journal, in which he describes himself and his world and proves that maybe he’s more than a “ghetto juvenile delinquent,” which is just what Mrs. Woodrow had suspected. A memorable debut. (Fiction. 12 & up)