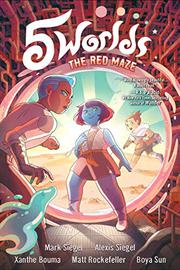 From the 5 Worlds series, volume 3

In their continuing quest to kindle the giant beacons that will save their worlds from eco-catastrophe, sand dancer Oona Lee and friends travel to Moon Yatta, an industrialized superpower that is being taken over by a corrupt demagogue.

Following the pattern of earlier episodes, Oona, An Tzu, and Jax Amboy travel to another distinctive world inhabited by a polychrome array of residents both humanoid and far otherwise. Though significant portions of the information-filled endpapers are covered by jacket flaps, the interior panels depict fully realized settings ranging from inner-city neighborhoods to remote desert, and they lay out a complex tapestry of local practices, politics, and values…many of which come into play as election day approaches. One candidate in particular, tycoon Stan Moon (eerily depicted as a white human above the waist, a writhing tangle of tentacles below), whips up fears of both foreigners and a reviled minority group of shape-changers. To accomplish her mission Oona must penetrate the well-defended jungle of power stations that have grown up to feed off the beacon while staying out of Moon’s clutches. Oona, with her bright blue skin and joyful dancing, again lights up the pages as new allies, some with conflicts or agendas of their own, join the notably diverse cast on the way to a tense, explosive climax.

More dazzling exploits in an exotic (though in this case somehow familiar) locale.