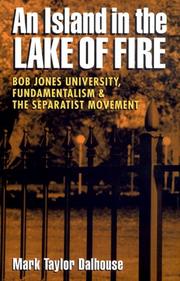 AN ISLAND IN THE LAKE OF FIRE

A competent history of Bob Jones University, in Greensville, S.C., and its extreme brand of Christian fundamentalism. Founded in 1927 by the patriarchal Bob Jones Sr., the eponymous university's self-described mission was and still remains to do combat with ``all atheistic, agnostic, pagan . . . adulterations of the Gospel.'' From an ongoing refusal to accept accreditation, to a general discouragement of independent thinking, to an infamous ban on interracial dating (on the theory that it could lead to satanic one-worldism), this hyperliteralist view of the Bible has wrought a university quite unlike any other. As university presidents, all three Bob Joneses, from Sr. to III, have also had a strong effect on shaping the school in their respective images. Dalhouse (History/Truman State Univ.) believes this accounts for some of the school's more paradoxical elements. For example, despite an insularity so relentless that interscholastic athletics are forbidden, students are pushed to succeed in the secular world. Then there is the world-class art collection, the well-known opera program and performance series, and the award- winning filmmaking program (although students are forbidden to go to the movies). In other words, the Joneses have freely accepted secularism when it suited their individual temperaments. Where they've refused almost any compromise is with fellow evangelicals and fundamentalists. Thus the Reverend Billy Graham is routinely demonized, and the Reverend Jerry Falwell was once characterized as ``the most dangerous man in America.'' It's all too easy to dismiss the Joneses as crackpot, cultish fanatics, but Dalhouse largely avoids the temptation as he tries to understand what makes them tick. His account is both evenhanded and fair, tracing in fine detail how the Joneses' beliefs and their university evolved. Though encumbered by frequent repetitions and structural awkwardness, this is a discerning narrative.