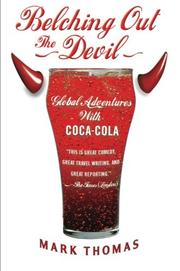 BELCHING OUT THE DEVIL

Coke adds life, says British comedian Thomas, except in all the places where it brings death.

The author, a pop-culture presence across the pond—when he started, he writes, “you didn’t have to fuck a footballer or eat kangaroo penis on a reality show to appear on TV”—offers plenty of witty, humorous lines, but his purpose is serious. Wearing his left-journalist hat, he writes about his obsession with Coke during his 20s and 30s and his gradual discovery of ever more disturbing things about the product. Defenders would doubtless say that the company is simply practicing good business, but as Thomas travels around the world from bottling plant to union meeting to community-organizing session, he finds plenty of provocative things to write about. One is the company’s apparent decentralization. Most of the bottlers are franchisees under the “Coca-Cola system,” dependent on headquarters in Atlanta largely for Coke’s sine qua non—concentrated syrup. But if you’ve had a Coke in nearly any part of the world today, adds the author, chances are that the syrup was made in Ireland, for complex reasons of economic preference, local labor conditions and laws, transportation and other aspects of globalism. All these are sticky subjects about which Thomas occasionally grows shticky, but you may never drink a Fanta again after learning of its origins in the Third Reich, nor take the pause that refreshes without awareness of child labor, union-busting, assassinations and other goings-on in the developing world, where Coke is, of course, a symbol of capitalist ascension.