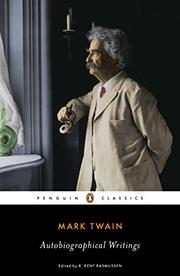 Mark Twain’s life and times, in his own words, through memoir and essay.

Piggybacking the 2010 publication of the first volume of the complete Autobiography of Mark Twain, this Penguin collection—edited by Twain scholar Rasmussen (Bloom's How to Write about Mark Twain, 2007, etc.)—offers an interesting alternate route to the great man’s life: the condensed memoirs published in his lifetime, along with numerous personal essays. Together they reveal a raconteur who saw life as an endless comedy and a frequent tragedy. Twain’s autobiography, dictated a few years before his death, shows his effortless genius for talk, whether he’s recounting a near-fatal dueling episode, how he aided a traveling mesmerist in conning an audience or how even America’s Greatest Humorist could bomb before an audience at a literary dinner. Death is also much on his mind. The book is dominated by the memory of his late daughter Susy, who died at 24 from spinal meningitis, and left behind a charming memoir of “Papa,” written when she was 14. Susy—“a frank biographer, and an honest one; she uses no sandpaper on me”—becomes the gateway through which Twain recalls the past and the prism through which he views mortality. In other autobiographical pieces, he recalls how he mastered the Mississippi after a slow and humiliating steamboat apprenticeship: “The face of the water, in time, became a wonderful book—a book that was a dead language to the uneducated passenger, but which told its mind to me without reserve, delivering its most cherished secrets as clearly as if it uttered them with a voice.” He also addresses his disappointed ambitions, the art of turkey hunting, his (largely discredited) doubts on Shakespeare’s authorship, how his views on slavery changed and how life is a matter of fortunate circumstance.

A compact, generous entry into the comic sensibility of a thoughtful, adventurous life.