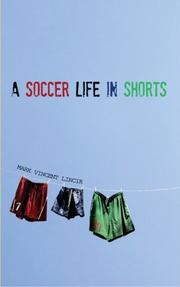 A SOCCER LIFE IN SHORTS

Lincir’s debut, a slim collection of reminiscences in the form of personal essays and poems, relates his love affair with the world’s most popular sport.

Over 30 years, Lincir has played “thousands” of games of soccer. He’s watched and written about it religiously. For a short period, he even refereed. “Loving the game,” he writes, “is what it’s all about.” As in most romances, there were victories, losses and lessons in humility. Traumatized by his first booking (yellow card) as an 8-year-old footballer, which was the result of a mistake made by his coaching father, he was brought to tears at the dinner table when his younger sister, also a soccer player, asked if she might see the yellow card, unable to comprehend why Lincir wasn’t actually given one. At the age of 12, he scored the game-winning goal in a tough 2-1 match; problem was, he scored in his own goal, making the car ride home with his dad and teammate Sean especially unpleasant. In his freshman year of college play, Lincir tells of scoring the perfect Pele-like “bicycle kick goal,” only to have it taken away by the ref as “dangerous play.” When Lincir writes of his minor league soccer days, he describes it as a rough road of “long drives and low per diems,” a lifestyle so cramped that getting his own room for a night felt like hitting it “big time.” Despite all of these humbling experiences, Lincir concludes that “not trying is the only disgrace.” Slight but endearingly told, the tales are jargon-rich, with references to getting “nut-megged” and the “flip-throw.” The author’s honest heart is strong and his gentle sense of humor engaging, and an assortment of black-and-white photos help bring the stories to life. Lincir writes with the energy of a young striker at the start of a big match, although his poetry adds little to the assembled snippets. Additional inspirational essays might have been a better choice.

Soccer fans will appreciate these tales of life on the pitch.