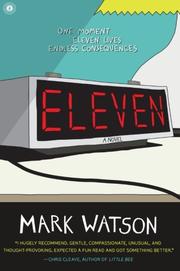 A heartwarming, humorous fable of a novel about the redemption of a popular radio talk-show host through his unlikely romance with a cleaning lady.

In his first novel published in the United States, British radio and TV personality Watson writes of the awakening of a man who is very much connected to his airwave audience but does his (unconscious) best to remain disconnected from the rest of mankind. The name he has taken since moving from Australia to London is Xavier Ireland, mainly because the initials form the Roman numeral equivalent of his favorite number (the titular Eleven, which has 11 chapters and details the links among 11 otherwise random lives). His only real contacts other than the disembodied voices on the airwaves—a lonely lot, looking to him for advice or at least companionship—are his radio sidekick Murray and his fellow competitors in a weekly Scrabble tournament. Murray wants Xavier’s company at a speed-dating session, where Xavier meets Pippa, who becomes his cleaning lady. As the blunt-talking Pippa assumes an importance in his life that Xavier never anticipated, he revisits the shameful incident that forced him to leave Australia and forge a new identity in England. And he discovers that “every person is connected to every other...everything has a chance of mattering.”

Though the novel belabors the “eleven” motif and its breezy prose has trouble supporting its heavier philosophizing, it will resonate with those who like to read about professionals looking for love and meaning in their lives.