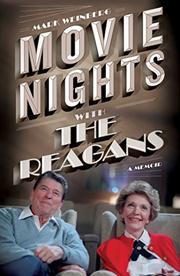 MOVIE NIGHTS WITH THE REAGANS

An exploration of what Ronald and Nancy Reagan thought of Top Gun, Ghostbusters, E.T., Back to the Future, Ferris Bueller’s Day Off, and other iconic movies.

In this sentimental but often revealing debut memoir, former Reagan spokesman and speechwriter Weinberg recalls his years with the first couple through the movies they screened for friends at Camp David. The Reagans were the first Hollywood couple to occupy the White House, and movies put them on familiar ground, especially when the president’s own rosy view of America was beginning to take hold. Some, like Raiders of the Lost Ark, the first of the Indiana Jones movies, restored the rugged individualist to the screen and reminded Reagan—the eternal supporting player—of the roles he always lost to Errol Flynn. The Reagans wept along with the rest of the country over E.T., the poor alien who was forced to flee the planet to escape government interference. Others, like WarGames, made such an impression that the film made its way into speeches on the administration’s missile defense program. “At one point,” writes Weinberg, Reagan “put aside his notes and talked about WarGames and the dangers an inadvertent launch might pose to the United States. His concern, like the film itself, was dismissed by some in the room as far-fetched, even absurd.” Saber-rattling entertainments like Top Gun, Red Dawn (a “stridently anti-Communist movie), and Rocky IV, which “coincided with the first real thaw in Soviet-American relations since well before President Reagan took office,” echoed the administration’s militarism and jingoistic approach to foreign policy. Sometimes, Weinberg seems to be compiling a brief in defense of his old boss—he’s still a press flack at heart—but he also captures the personable nature of the Reagans and how they shifted and reflected the cultural landscape.