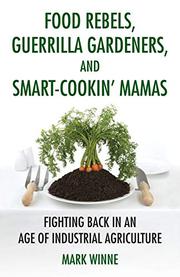 Fighting Back in an Age of Industrial Agriculture

More food for thought from a veteran agricultural activist.

In his previous work (Closing the Food Gap: Resetting the Table in the Land of Plenty, 2008), Winne established that hungry America isn’t feeding its masses nutritiously nor eco-consciously enough. He continues this theme with an apocalyptic opening sequence in which, in the year 2020, a dystopian world succumbs to food conglomerates and mega-processing plants while the environment simmers in a global-warming oven. There’s two camps in the increasingly complicated food wars—industrialized, overprocessed cuisine competes with “alternative,” “good food” that harms neither environment nor human and is at the forefront of the locavore movement. The author crunches the numbers to reveal positive progress. An increasing percentage of grocery companies are using hormone-free animal products and locally grown produce, but these developments, Winne writes, are impeded by factors like the population boom, changing diets, prices and climates. The author’s references to Ralph Waldo Emerson, Dostoevsky, broadcaster Charles Kuralt and newspaper columnist Ellen Goodman fortifies his research when paired with informative case studies and excursions to food initiatives in Cleveland, Maine, New Mexico and the empowering Austin, Texas–based cooking and nutrition-educational program, Happy Kitchens. Winne firmly believes that “institutional forces are working feverishly to influence our food systems” to a detrimental degree, but the mention of his own intrinsic humanity is refreshingly relevant: “I eat meat because I have yet to find much in life that competes with a tender rib eye accompanied by a good bottle of zinfandel.” Thankfully, the author doesn’t provide all bad news, and his examination challenges readers to galvanize and bolster reform efforts and, by example, continue the revolutionary concept of “food sovereignty” for American consumers.

A good combination of solid research and affirmative testimonials.