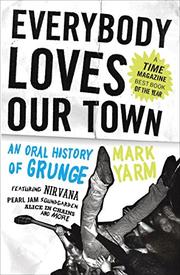 EVERYBODY LOVES OUR TOWN

An Oral History of Grunge

When most music fans think “grunge,” they justifiably think Nirvana, Soundgarden and Pearl Jam, not necessarily in that order. With this massive oral history, former Blender senior editor Yarm also hips readers to such bands as the U-Men, Cat Butt and TAD. Because the bands' respective members are so engaging and insightful during their interviews, readers will probably fire up their iTunes to find out what these groups were about—which, we discover, was fearlessness. Their music was punk-soaked, angry and defiantly off-kilter, and they weren't afraid to set a stage on fire, incite a crowd or imbibe everything that could be imbibed. Readers will also learn about the semi-rises and painful falls of groups like Mother Love Bone, the Melvins and Screaming Trees through the voices of Mark Lanegan and Buzz Osborne, among many others who tell one hell of a story. The book is at once celebratory and heartbreaking, but what takes it to the next level are its underlying themes, specifically those of jealousy and self-abuse. At the beginning of the grunge movement—important note: Everybody in Seattle hated the word “grunge”—there was a familial, supportive atmosphere that went out the window once certain bands experienced what their rivals/brethren believed to be undeserved success. (Suffice it to say that it's probably best not to mention Candlebox to any Seattle-ite music nerd.) The number of drug-related deaths in the scene was such that one would assume lessons would have been learned. Unfortunately, that hasn't been the case: Alice in Chains bassist Mike Starr—one of the narrative’s most memorable voices—died of an overdose soon after the book was completed, a sad coda to a book that pays homage the beauty and horror of modern rock. Yarm's affectionate, gossipy, detailed look at the highs and lows of the contemporary Seattle music scene is one of the most essential rock books of recent years.