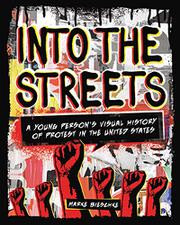 A Young Person's Visual History of Protest in the United States

An introduction offers readers definitions of what protest is and the many ways it can manifest. The protests covered center people of different races, classes, sexual orientations, and genders as well as including non–identity related protests, making this a thoroughly representative book. Important players, like Marsha P. Johnson and Sylvia Rivera, activists for transgender rights in the Stonewall uprising, are highlighted, and continued injustice is acknowledged, including the modern-day prison industrial complex. Bieschke ends by offering suggestions for readers interested in starting their own protests. Despite these strengths, some of the language used to describe nonviolent protest (such as calling sit-in protesters “polite”) harkens to respectability politics. Applying the word “violent” to early Native American resistance while positioning European settler-colonists as having “used force”—not violence—to “evict” Native Americans feeds into common biases. Later, the same chapter claims slave owners were “often abusive,” although the institution of slavery was itself inherently abusive. As the book progresses, these problematic missteps appear less frequently. Overall, Bieschke does an admirable job of connecting protests to their historical moments. Ample use of photos, historical illustrations, and informative sidebars adds visual engagement.

Despite occasional stumbles, this is an engaging overview to inspire socially minded readers.