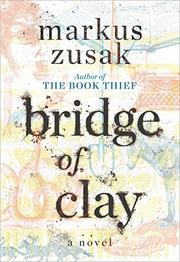 Years after the death of their mother, the fourth son in an Australian family of five boys reconnects with his estranged father.

Matthew Dunbar dug up the old TW, the typewriter his father buried (along with a dog and a snake) in the backyard of his childhood home. He searched for it in order to tell the story of the family’s past, a story about his mother, who escaped from Eastern Europe before the fall of the Berlin Wall; about his father, who abandoned them all after their mother’s death; about his brother Clay, who built a bridge to reunite their family; and about a mule named Achilles. Zusak (The Book Thief, 2006, etc.) weaves a complex narrative winding through flashbacks. His prose is thick with metaphor and heavy with allusions to Homer’s epics. The story romanticizes Matthew and his brothers’ often violent and sometimes homophobic expressions of their cisgender, heterosexual masculinity with reflections unsettlingly reminiscent of a “boys will be boys” attitude. Women in the book primarily play the roles of love interests, mothers, or (in the case of their neighbor) someone to marvel at the Dunbar boys and give them jars to open. The characters are all presumably white.

Much like building a bridge stone by stone, this read requires painstaking effort and patience.