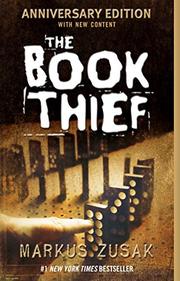 When Death tells a story, you pay attention. Liesel Meminger is a young girl growing up outside of Munich in Nazi Germany, and Death tells her story as “an attempt—a flying jump of an attempt—to prove to me that you, and your human existence, are worth it.” When her foster father helps her learn to read and she discovers the power of words, Liesel begins stealing books from Nazi book burnings and the mayor’s wife’s library. As she becomes a better reader, she becomes a writer, writing a book about her life in such a miserable time. Liesel’s experiences move Death to say, “I am haunted by humans.” How could the human race be “so ugly and so glorious” at the same time? This big, expansive novel is a leisurely working out of fate, of seemingly chance encounters and events that ultimately touch, like dominoes as they collide. The writing is elegant, philosophical and moving. Even at its length, it’s a work to read slowly and savor. Beautiful and important. (Fiction. 12+)