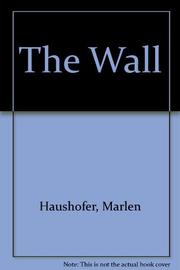 Originally published in German in 1962 and touted more recently as a feminist's Robinson Crusoe, this somber classic from prize-winner Haushofer chronicles the experiences of a (nameless) woman cut off from her familiar city ways in a remote hunting lodge, after Armageddon has snuffed out all life in the world beyond. With the woman's diary of activities during the first two years of isolation as foundation, the story assumes the shape and flavor of a journal. Saved from instant death by a transparent, apparently indestructible wall enclosing a substantial area of forest and alpine meadow, the woman finds relief from her isolation in companionship offered by a dog, a cat, kittens, and a cow and her calf, making them into a family that she cares for faithfully and frets over incessantly with each season's new challenges. Crops of potatoes, beans, and hay are harvested in sufficient quantity to keep all alive, with deer providing occasional meat for the table, but the satisfaction of having survived long winters and a halcyon summer is undone by a second sudden and equally devastating catastrophe, which triggers the need in her to tell her story. Although heavy with the repetition of daily chores, the account is also intensely introspective, probing as deeply into the psyche of the woman as it does into her world, which circumstances have placed in a new light. Subtly surreal, by turns claustrophobic and exhilarating, fixated with almost religious fervor on banal detail, this is a disturbing yet rewarding tale in which survival and femininity are strikingly merged. Not for macho readers.