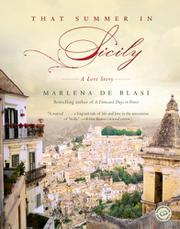 THAT SUMMER IN SICILY

From de Blasi (The Lady in the Palazzo, 2007, etc.), a fragrant tale of life and love in the mountains of Sicily.

Shortly after the Venetian interlude she luxuriously captured in A Thousand Days in Venice (2002), the author accepted an assignment to write a magazine article on the interior regions of Sicily. Like many other journalists, she was met by silence from the wary Sicilians. She was about to retire to the mainland when she stumbled upon Villa Donnafugata, whose romantic turrets, towers, balconies and chromatically tiled roof were surrounded by gardens, fields, piazzas and hills. The black-draped, oldish women in residence tended to their various labors, chanted, laughed and prayed. The sun was hot, the smell of herbs suffused the air. Was this a fever dream? de Blasi wondered. No, but it was surely a place from another time, and how it emerged out of feudalism through an act of moral modernity was a story unfurled to the author by the villa’s mistress, Tosca. The tale, which comprises most of the book, is a marvel. As a child of nine or ten, Tosca was sent by her horse-breeder father to live with a Sicilian prince, Leo, who “had a stallion that Tosca’s father wanted more than his daughter.” Early rebellion gave way to affection, then love. Together, in the years following World War II, the prince and his ward brought education, health care and a shared sense of purpose to the village around their manor. Rapture and grief came in measured doses, but ultimately Leo was run out of town for his affront to the “centuries’-old system of hierarchy that kept the wealthy in comfort and the poor in misery.” Even in 1995, when de Blasi first visited Donnafugata, the old ways abided, like the shawl Tosca wore at night, still permeated with the scent of her beloved.