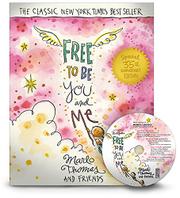 Some 35 or so years on, a self-empowerment classic gets a long-overdue makeover featuring minor changes to the written content but nearly all-new art. The poems, lyrics, parables, dialogues and short stories—contributed by the likes of Shel Silverstein, Dan Greenburg, Judith Viorst and Judy Blume—are as fresh as ever, even barely (if at all) revised. They’ve never looked better either, thanks to new pictures from more than a dozen illustrators from Tony DiTerlizzi and David Catrow to Jerry Pinkney and Peter Sís. Two entries in the original have been dropped, two (including a closing comment by Kurt Vonnegut) added, their order lightly massaged and all of the musical arrangements grouped together at the end. The result makes as persuasive an argument as ever against prescriptive sex or life roles: As Thomas writes, “ ‘Should’ is a small and bossy word. ‘Could’ is as big and beautiful as the sky.” Packaged with a CD (not heard). (Anthology. 9-11)