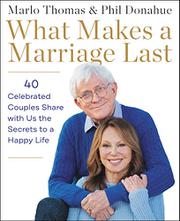 WHAT MAKES A MARRIAGE LAST

Hoping to be both informative and inspiring, Thomas and Donahue, happily married since 1980, interviewed 40 couples (including a few same-sex pairs), most married more than 20 years, to find out “if there really is a secret sauce to a successful marriage.” The authors’ disarming ebullience makes them endearing interviewers, with questions including how the partners first met, how they knew they were in love, what they learned from their parents’ marriages, how they resolve fights, and how they have dealt with blended families, survived traumatic problems, and maintain their individual growth and change. “What advice,” they ask, “might they give to younger couples starting out—or the already married—that they wish they had known themselves when they first took their vows?” Not surprisingly, competitiveness emerges as a frequent question for celebrity couples. “I’ll tell you one thing we’re never jealous of is each other’s career,” Kevin Bacon remarked about his marriage to Kyra Sedgwick. Sedgwick stopped working to raise their family, taking a role in The Closer when their children were teenagers. By then, having lost their savings in Bernie Madoff’s Ponzi scheme, they needed her income. Although couples like Michael J. Fox and Tracy Pollan hoped to emulate their parents’ wonderful marriages, many couples vowed not to repeat their parents’ animosity or the troubles they experienced in their own first marriages. Some partners—Thomas and Donahue, James Carville and Mary Matalin, among others—accommodate vastly different personality traits. Carville and Matalin decided to be interviewed separately, in fact, the better to answer questions honestly. Much marital advice underscores what Judy Woodruff calls “the eternal values, like honesty, integrity, and respect. And, yes, love.” As Rob Reiner’s mother once remarked, the key to a long marriage is to “find someone who can stand you.” Other contributors include Jimmy and Rosalynn Carter, George Stephanopoulos and Ali Wentworth, and Joanna and Chip Gaines.