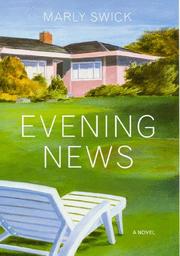 Swick’s fourth book and second novel (following last year’s Paper Wings) is an engrossing domestic melodrama carved from the same vein mined so successfully by writers like Sue Miller and Jane Hamilton. Things begin explosively, with the accidental shooting of two-year-old Trina by her nine-year-old half-brother Teddy. Trina dies, and the story of that loss’s effect on her survivers is told in the juxtaposed narratives of guilt-ridden Teddy and the children’s stricken mother Giselle. We learn that Giselle had divorced Teddy’s father Ed and fled Nebraska for southern California, where she found a fulfilling intellectual life and, eventually, marriage to her adult ed English teacher Dan Trias. The likable Giselle laboriously pulls herself through the twin ordeals of losing a child and managing not to blame Teddy (who is all but destroyed), but Dan, a much less generously realized character, cannot as well as she does. The resulting tension between the two of them drive Dan briefly away—and (in a just barely credible plot development) to the writing of a book about their loss—while Giselle (vacillating between anger and pain, between fantasies of revenge and reconciliation”) goes back to Nebraska, where Teddy, visiting his father, has preceded her, to try to pull herself together again. Swick occasionally miscalculates (Dan’s emotional confusion effectively obliterates any clear definition of his character), but she touches us by demonstrating how the Triases— efforts to resume a “normal” life are repeatedly, inevitably thwarted, and she delineates with moving restraint the progress Giselle and Ed make toward a truce. Best is her characterization of Teddy: a brave, bright, sentient kid who painstakingly learns to accept responsibility for his act, grow beyond it, and shape his future accordingly (“Now I want to learn what it feels like to save a life”). Overlong, and its insights into the psychology of grief and guilt are unexceptional. But the voice and spirit of that little boy will stay with you. (First printing of 100,000)