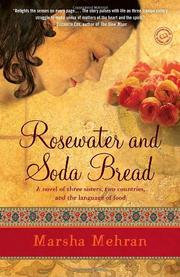 A Novel of Three Sisters, Two Countries, and the Language of Food

Mehran’s second novel (Pomegranate Soup, 2005) returns to Ballinacroagh, County Mayo, circa 1987, and the thriving Babylon Café where food is sustenance for the soul.

The Aminpour sisters from Iran are happily running their café, where oldest sister Marjan cooks according to Zoroastrian tenets that connect ingredients closely to spiritual as well as physical health. Marjan has carried the responsibility for her younger sisters’ care since their flight from revolution-torn Iran a decade earlier. One sister, Bahar, who keeps the café sparkling clean, is a sensitive girl whose brief marriage to a brutal Muslim fundamentalist left her emotionally scarred. Layla, meanwhile, is a schoolgirl obsessed with Much Ado About Nothing and in love with her boyfriend, university student Malachy. Beloved by most of the villagers, the sisters are not without certain enemies—among them the sour widow Dervla Quigley, who spies on the café from her window across the street. This sequel to Pomegranate Soup finds each sister now facing her own secret challenge. Bahar has been meeting with Father Mahoney about converting to Catholicism. Layla is considering consummating her relationship with Malachy, much to Marjan’s consternation, and Marjan, whose first love affair ended tragically in Iran, finds herself attracted to a new suitor, Julian Muir, a novelist and student of Rumi who has returned to Ballinacroagh to renovate his family estate. Meanwhile Estelle Delmonico, the elderly Italian immigrant who sold her late husband’s bakery to the Aminpours, which they then turned into the café, has retired to her country cottage. Out walking one morning, she finds a half-drowned girl who has attempted an abortion, illegal in Ireland. Estelle embroils herself and Marjan in the risky adventure of saving the girl and finding her family before the authorities crack down. Humanistic goodwill, tinged with spirituality, overcomes fundamentalist rigidity, while the closing pages—not counting the inevitable recipes—hint at another installment to come.

This time Mehran adds too much sugar to the recipe.